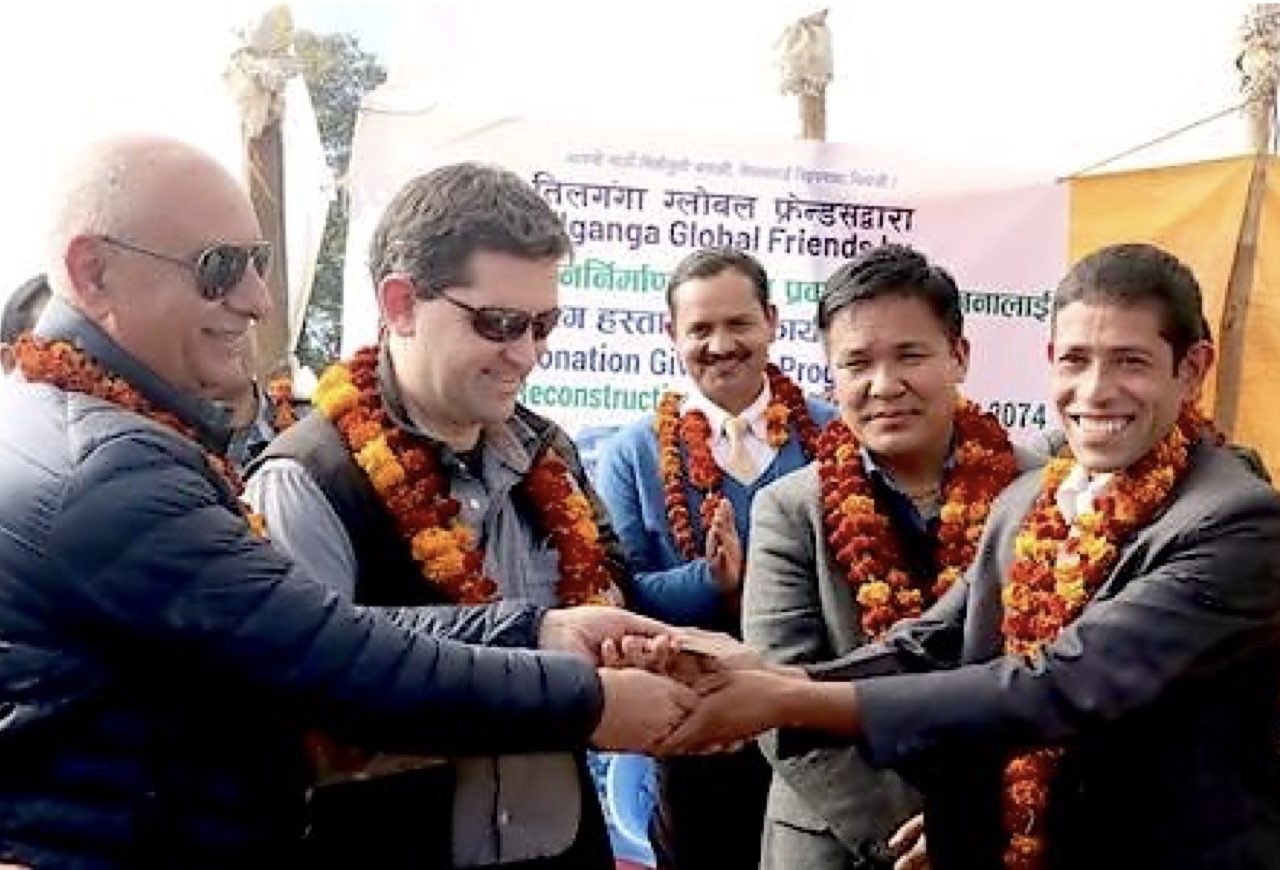 Pledges additional 2 crore based on progress in construction

Suhrid Ghimire (left), Chairman of the Nepal Eye Program, and Thomas Büchli, representing Global Friends of Tilganga, hand over the cheque of 1 crore to Raj Kumar Bhattarai of the Giranchaur Community Reconstruction Tourism Promotion at a function in Giranchaur, Sindhupalchowk on December 29, 2017. Also seen are former chief of the National Reconstruction Authority Dr Govinda Pokharel (center), and provincial MP from Sindhupalchowk Nima Lama.

Global Friends of Tilganga has provided Rs one crore in assistance for the reconstruction of an integrated settlement in Giranchaur village in Melamchi municipality, Sindhupalchowk.

Tilganga said more support is in the offing if evaluation of construction work shows satisfactory progress. The plan is to assist Rs 200,000 to each household, including the amount provided now.  If Tilganga provides this assistance as well, its total support will amount to Rs 3 crore.

The project, conceptualized and led by the community itself, is estimated to cost 29 crores. After the 7.8 magnitude earthquake of 2015, Medical Director at the Tilganga Institute of Ophthalmology (TIO), Dr. Sanduk Ruit had pledged to support the settlement’s development, and called upon Tilganga’s friends and well-wishers abroad to offer their helping hands.

Addressing the function organized in Giranchaur to hand over the cheque of Rs one crore to the Committee overseeing and managing the construction, Suhrid Ghimire, Chairman of the Nepal Eye Program, the implementing body of TIO, said that Tilganga felt it a matter of pride to support the “exemplary work of integrated settlement”. He expressed hope that the community will incorporate features of eco-friendly and green village like solar panels and bio-gas.

The speakers addressing the function agreed that the integrated community is a model project of post-earthquake reconstruction in the country that is still grappling to rebuild after the devastations of the earthquake.

Former CEO of the National Reconstruction Authority, Dr Govinda Pokharel, who laid the foundation stone of the settlement soon after assuming the post in February this year, said that the redeveloped settlement will be successful because this was conceptualized and led by the locals themselves.

“Integrated settlements developed by the government has every chance of turning unsuccessful,” Dr Pokharel said. “Several government-led settlements have been failures in India and Pakistan. That the Giranchaur locals have themselves envisioned and led this project will ensure its success and sustainability.”

Foundations are already laid of the 83 of the150 concrete, quake-resilient houses of the settlement.

All houses are designed to be friendly to the needs of the elderly, women and disabled, and will have taps with running drinking water, and kitchen garden.

It will also have homestay for tourists as sustainability project. By adopting a concept of ‘one household one worker’ approach, the project is covering the entire labor cost from among the villagers.

Praising the villagers for courageously taking up this project that seemed unachievable in the beginning, newly elected MP from Sindhupalchowk, Sher Bahadur Tamang, and provincial assembly member, Nima Lama assured they will upgrade the road to Giranchaur so villagers and tourists have easy access.

Thomas Büchli, President of the Vision Himalaya, which has supported Tilganga’s efforts through the Global Friends of Tilganga, praised Giranchaur’s initiative as a healthy reconstruction process.

“I will take from here a strong impression of a healthy reconstruction process and will share with those who supported this endeavor that they can all be proud of their support, he said.

Speakers, meanwhile, also stressed on the need for the integrated settlement to focus on economic productivity and sustainability of the village.

Stating that Giranchaur is gifted with a panoramic view of mountains, MP Tamang urged locals to strongly promote homestay facilities for tourists and reap benefits from the village’s unique natural beauty and local food.

Raj Kumar Bhattarai, Chairman of the Giranchaur Community Reconstruction Tourism Promotion Committee, briefed the guests and the audience about the project and the progress made thus far.

The settlement is one of the three closely located integrated settlements being developed in Giranchaur. One of these was built by the Dhurmus-Suntali Foundation of the comedian couple Sitaram Kattel and Kunjana Ghimire and handed over to the community last year.